Spyro the Dragon merchandise: be the first to see our official range! 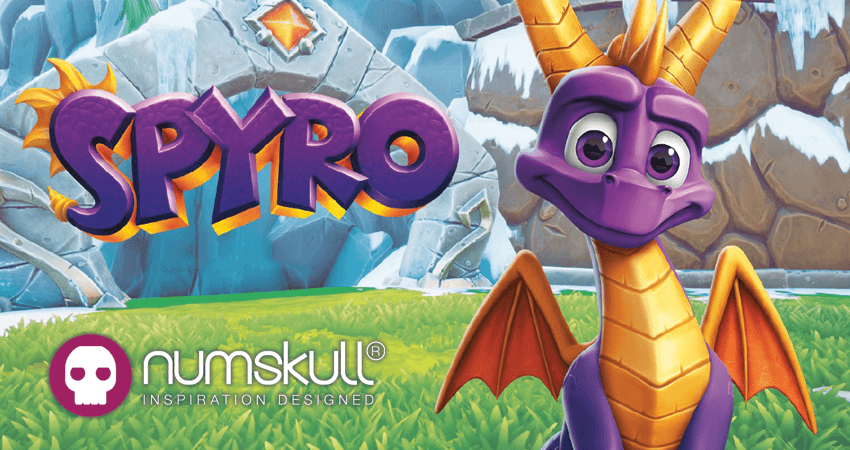 When it comes to gaming icons on the original PlayStation, there are two mascots that spring to most people’s minds first – Crash Bandicoot, and Spyro the Dragon.

Both belong to beloved classic franchises, and thankfully, Activision recognised the demand for their return by producing remasters of the original PS1 games; Crash Bandicoot: N-Sane Trilogy contains the first 3 Crash titles, with the purple dragon himself receiving similar treatment on September 21 with the upcoming Spyro Reignited Trilogy.

Our dedicated design team at Numskull knew that remasters alone couldn’t quench fans’ thirst, so we celebrated the return of Crash with officially licensed shirts, jumpers, keychains, mugs, candles, wallets, pins, and more – if you’re a Crash fan, chances are you already have some of our awesome merch. (If you don’t already, you should totally check it out!)

Now, in celebration of the Spyro Reignited Trilogy, we’ll have an entire range of officially licensed Spyro merchandise and clothing to collect, wear, use, and adore later this year!

If you’re a keen Spyro fan, you’re probably already following us on social media and have spotted our tantalising teases. But we’ve set up a way for the most dedicated of fans to find out about our range before anyone else.

Simply sign up to our mailing list on the right side of this blog post, and… that’s it! You’ll be the first to see our entire Spyro the Dragon merchandise range when we’re ready to reveal it.

Trust me, as a fan myself, I’m just as excited to finally get my hands on Spyro merch as you are – you’re going to love what we have in store!